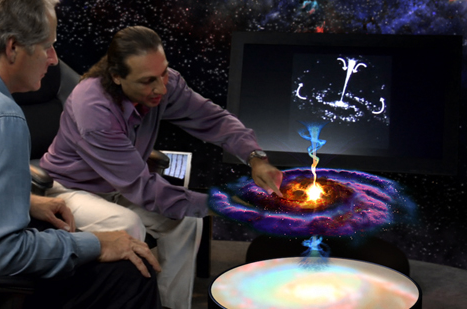 The Scientific Revolution Has Begun

Rather, when I say Revolution I am talking about a Revolution in the world of Physics that will change the entire world.

It is Physics that gives birth to our modern, technological world; without physics, there would be no technology and there would be no modern society.  Thus, by starting a revolution in the world of physics, we guarantee the ability to change the entire world and resolve most all of the planetary issues we are currently facing on this planet today.

For a hundred years now physics has believed in “The Standard Model” which says, there is a very “Strong Force” holding together the Protons within the Nucleus of all Atoms.

When physicists realized this conundrum, they concluded there MUST be a very Strong Force holding those little protons together within the nucleus of atoms.  From there, the “Strong Force” was invented (the Strongest Force in the entire Universe!) to hold those protons together.

However, Nassim Haramein has recently proven that the “Strong Force” and the “Standard Model” actually rely upon a mis-measurement of the energy density of all Protons.

Along with Dr. E.A. Rauscher, Nassim Haramein has published a more precise cosmological mathematics, which shows that the mysterious “Strong Force” is actually “Quantum Gravity” in disguise.

The Standard Model of physics has been overturned and we now have a more accurate measurement of the quantum world.

In addition to The Schwarzschild Proton, Nassim Haramein has published The Origin of Spin.
Within this paper, Nassim Haramein and Dr. Elizabeth Rauscher have effectively added “Torque” calculations to Einstein’s Field Equations, thus identifying the source of Charge within all subatomic particles (protons and electors) – a very useful discovery.

Thus, opening up the door to Magrav Technology as means of Lift, Drive and Energy Generation – replacing combustion technology and resolving the energy and environmental crises plaguing our planet today.

Additional reading material on this topic.